skip to main | skip to sidebar

Secrets of the Sea

Picking toys is not easy and there is a toy website called ebeanstalk that is dedicated to selecting good, safe learning toys. They need help from moms (like me!) to help pick the toys. We recently received a game from ebeanstalk for Matthew (age 6) and Joshua (age 5) to review. My boys absolutely love board games and we have quite a collection of them. They were both very excited to try out a new game! The game they sent is called Secrets of the Sea from Playroom Entertainment, who makes great educational toys. 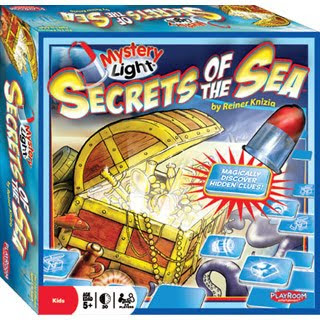 As with any new game, I spent several minutes reading the directions while the boys frantically set up the game pieces. There are a lot of small tiles that are placed on the game board but the set up is simple enough that the kids can do it themselves. There is a game piece that requires the installation of a battery (included) so I had to do that for them.

The theme of Secrets of the Sea is a deep sea dive. The object of the game is to dive to the bottom of the sea and earn points along the way by collecting treasure, battling sea monsters, and earning rewards. The game seems a bit complicated at first and my boys were more interested in using the "mystery light" than listening to me read instructions. Once we played one game together, they were experts. They spent an entire afternoon playing together. Two boys playing quietly together? Unbelievable. 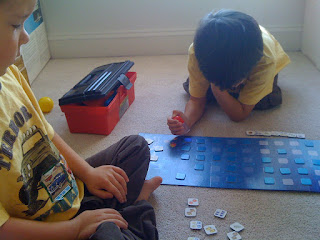 The best part of this game, according to Matthew and Joshua, is the mystery light. Each player begins their "dive" at the top of the game board. They roll the dice to determine how deep they can dive and then choose a tile accordingly. Once they pick a tile, they shine the mystery light on the blue surface of the tile to reveal a secret picture. In the words of my 6-year old son, it is "awesome!" 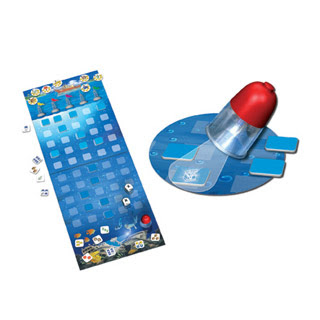 Each player takes turns diving and collecting tiles. There are rewards (treasure chests, gold, etc.) and there are even sea monsters that must be defeated. The players keep diving until they reach the shipwreck at the bottom of the game board or until all of the tiles are gone from the board. The winner of the game is determined by who has the most points, based on the tiles collected. 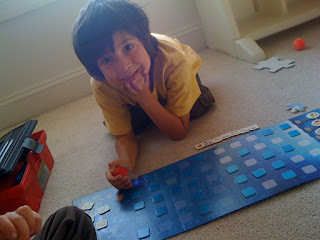 Secrets of the Sea is a unique board game because of the very cool mystery light. The concept of the game is easy to grasp and appealing to school-age children. The game is intended for children ages 5 and up. I have to admit, I even enjoyed it myself! Up to 4 players can play together, but only 2 are required. This makes it a perfect "quiet time" game for the big kids while I'm taking care of the little kids.

I think Secrets of the Sea even appeals to children who don't typically like board games because the mystery light makes even more interesting than the usual roll-dice-move-peg type games. I love to give (and receive!) board games as Christmas gifts and this is one that I would definitely recommend. My 6-year old and 5-year old loved this game and ebeanstalk has a large selection of 5 year old toys and games. Check out ebeanstalk for more educational toys and games for all ages.

I was given the Secrets of the Sea game in exchange for offering an honest review for ebeanstalk. No other compensation was received.

Posted by heather@it'stwinsanity at 8:56 AM 1 comments

heather@it'stwinsanity
I'm a Christian mom, Army wife, and doula. I've had 6 children in 5 years including not one, but two, sets of identical twins. I'm an advocate for homebirth and I gave birth to my twin girls on the floor of my own bedroom. (View my homebirth story here. ) I just survived a long deployment and a cross-country move with sanity mostly intact.