skip to main | skip to sidebar

I'm sure everyone is now aware of the dangers of certain toys that may contain lead paint, small magnets, etc. after the huge recalls last summer. This prompted many parents to start buying "China-free" toys and other products. Safety is obviously a huge concern and with so many people "going green" it only makes sense that our childrens' toys should follow suit.

I was already a fan of natural toys before the recalls but was even more resolved to find cool toys that were safe for my kids. I love Waldorf type toys that encourage imaginative play. In my quest for exciting new toys I came across some great websites such as Sara's Toy Box and the big toy stores like Oompa and Magic Cabin. 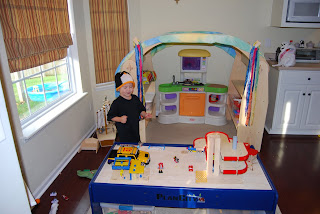 Last Christmas my kids were delighted to receive a wooden playstand and the entire PlanCity set with parking garage and little wooden vehicles. It was a huge hit! We also discovered Automoblox which soon became the boys' favorite toys. (This year we are hoping to get a nice wooden kitchen set for our kids!) PlanToys in particular is a very responsible company that takes pride in being eco-friendly. Their toys are made of organic rubberwood and dyed with water- and plant-based inks. 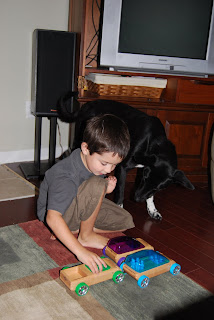 Sometime in the midst of our toy purging my friend Christen also decided to make the switch to more natural toys. And soon she became somewhat... shall we say obsessed? Out of her new found obsession Lizzy Bee Natural was born.
Lizzy Bee Natural is still relatively new but new products are always being added. From our favorite Automoblox to the adorable PlanToys tea set, there is something for everyone. Because I know the owner so well I can confidently assure you that she has great customer service and she really knows her toys!
From now through December 10th you can use the code "twinsanity" to save 15% off of any order (excluding cloth diapers.) You can't beat that deal for some of the coolest toys around!
I did not receive any compensation for this review. I just wanted to share the news about this great store!

Posted by heather@it'stwinsanity at 3:25 PM 0 comments

My boys have just become swingers! The first in the family as a matter of fact!

I've somehow survived infancy with 4 other children before discovering the joys of using a swing. With my oldest child I never bought a swing and he loved his bouncy seat (that's how I snuck in a daily shower) so I just used that instead. When Baby #2 came along I never thought twice about buying a swing since we hadn't used one before. When the first set of twins arrived I did think that a swing would be useful but wasn't going to go buy 2 of them without knowing if the babies would like them. (These were the same babies that hated their bouncy seats!) 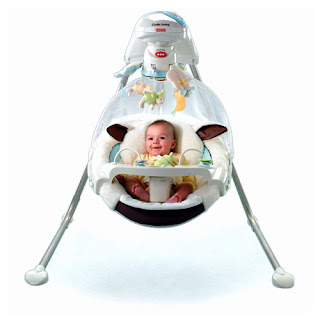 When I was given this swing recently I was excited to finally try an infant swing with my babies. And since these new babies are my fifth and sixth children in less than 6 years- and my second set of twins- I figured the swing would get some use. I was right.

At first neither baby would let me put them in the swing. This is because they wouldn't let me put them down at all! When we tried the swing there was screaming and so we waited a couple of weeks and tried again. 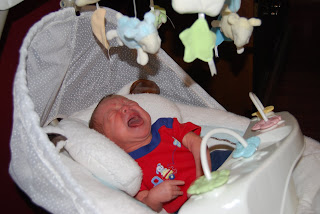 I am what some might call an "AP" parent. That is, we practice a lot of the principles of attachment parenting. Usually I have a baby in my arms or I am wearing them in a Mei Tai carrier. With just one baby this is easy! When you start adding more babies it becomes a bit challenging.

I love having the option of putting a sleepy baby into the swing. I will usually nurse the babies and then put the sleepier one in the swing while I wear the other one in the carrier. This leaves my hands free to take care of the other children and (usually) buys us some quiet time.

This swing is perfect for newborns because it has a cradle motion that gently rocks the baby from side to side. My twin boys were about 4 weeks old when they started to really enjoy the swing. There are different speed settings so even the youngest infant can be lulled to sleep. My favorite thing about this swing is the plush fabric. I have never felt such soft fabric. The headrest is so nice that I've considered removing it to use on my bed. Seriously.

At almost 7 weeks old my babies are starting to take an interest in the mobile that hangs over the seat. The mobile is fascinating to them because it has a globe-shaped mirror that is surrounded by soft stuffed lambs. You can even set the mobile to rotate. My babies will actually sit in the swing when it's not moving and just stare at the moving mobile while listening to the soft nature sounds it plays. 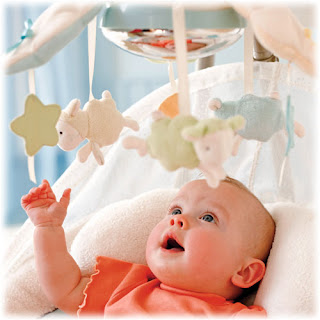 As my babies grow we'll get to test out another versatile feature of this swing- the seat converts to a traditional swing so that baby can swing in a front-to-back motion. This works well for older babies who want more stimulation.

For now, this swing is like an extra set of arms for me. Sometimes it's the only way I get lunch made or get the twin toddlers' diapers changed. When I can't have the babies in my arms, I have a nice, soft place to set them for a few minutes. And that is priceless in the House of Twinsanity! 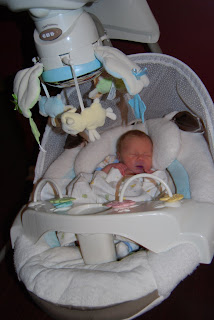 I was given a swing by Fisher-Price in exchange for offering an honest review of their product. No other compensation was received.

Posted by heather@it'stwinsanity at 3:20 PM 0 comments

heather@it'stwinsanity
I'm a Christian mom, Army wife, and doula. I've had 6 children in 5 years including not one, but two, sets of identical twins. I'm an advocate for homebirth and I gave birth to my twin girls on the floor of my own bedroom. (View my homebirth story here. ) I just survived a long deployment and a cross-country move with sanity mostly intact.